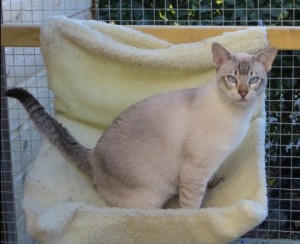 On Friday 5th of June between 1 and 6am Io had her kittens right by my side. She showed signs of going in to labour in the evening, but did not want to leave my side so initially I slept by her kitten pen. When nothing happened (as these things can take sometime to get going) I went to bed and Io followed me. I woke to the sound of little squeeks not an hour later and produced the first kitten on my bed. With some coaxing I managed to bring her to kitten room where the further 4 kittens were born. 3 males 2 females, 3 obvious tabbies, 3 obvious mink coat patterns the rest, well as ever with Tonkinese Kitten colours, it’s a waiting game. 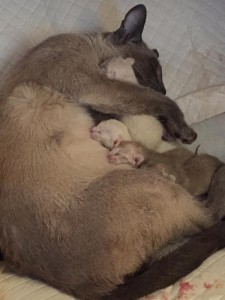 Io and her 5 little fluffies

Kittens from this mating are 4th Generation Tonkinese (CSSR register) and eligible to be shown with the GCCF & TICA. Early indications are that I have kittens with both TCR (mink) and CCP (pointed) patterns and potentially all 4 main colours, Brown, Blue, Chocolate and Lilac, with 3 definite tabbies.