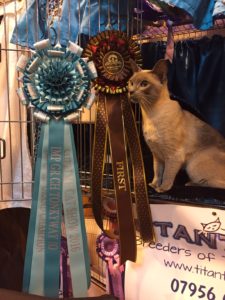 Io is our long awaited first Tonkinese female and our foundation breeding queen. She has been entrusted to us by Julie Singleton of TONKYWAY & SIALAXY, who has become a good and dear friend. We have been lucky to spend time with Io from the day she was born all the way up to her coming home, seeing her change shape and her personality develop. She has shown herself to be always putting her nose in to trouble, following her brother Jupiter in whatever escapade he may be leading them off in to. She is curious whilst still taking time to assess the situation, but bold enough to put Jupiter in his place when he pushes his luck.

Io is Blue and has the Tonkinese coat pattern otherwise known as Mink. As she is a 5th Generation Tonkinese and is on the full register, we introduced Io to the show bench whilst a Kitten and then as a young adult with success gaining the title of Champion. She has now proven herself to be a dedicated and adoring mother to her first litter, we look forward to her second litter in 2015.

2/03/2013: We couldn’t be more pleased, Io achieved the title of Champion today at the back to back Wessex Cat Club and Herts and Middlesex C. C. Show – very proud parents. She will now compete at Grand Champion level until she goes to stud later this year.

Kittens planned from Io this year will be 5th Generation on the full register with the GCCF (CS) and eligible for showing with the GCCF and TICA.

21/8/2013: We received our genetic test results back from Langdon’s today and can report that Io does carry Chocolate, and is negative for Progressive Retinal Atrophy (PRA). Carrying chocolate will allow Io, in conjunction with the right male Tonk to product all 4 of the main coat colours; Brown, Blue, Chocolate & Lilac.

All colour patterns can now be shown with the GCCF, Colourpointed Pattern (Pointed) and Burmese Colour Restriction (Solid) as of the 26th June 2013 can now be shown in Assessment Classes which if they achieve merits, will aid those patterns within the breed to reach Championship status like the Mink.

2/8/2014:  RESERVE GRAND CHAMPION, West Country Cat Club Show – Io was very well received post litter of kittens, we could already tell it had done her dividends but to gain her first Reserve Grand Champion Certificate and first place in her side classes was more than we could have hoped for 14 weeks after giving birth.

12/9/2015: 2x GRAND CHAMPION CERTIFICATES, Somerset & West Country Joint Cat Show – Pleased as punch; Originally Andromeda had been entered in to this show but at the last minute Io traded places when Andromeda went off to stud. I didn’t expect much, 14 weeks after kittens and a year from her last outing. So when she obtained both Grand Certificates and 4 first places in her side classes – I couldn’t be more pleased 🙂

29/9/2015: 1x GRAND CHAMPION CERTIFICATE & BEST OF BREED, South Western Counties Cat Club Show – WE DID IT! Io was made up to Grand Champion today. Once again she was looking gorgeous but a little shy. However when I saw 5 others in her class I thought our luck was about to run out. The girl did her mum proud not only gaining her Grand Certificate but also the Best of Breed beating the currently most decorated Tonkinese ever to be shown. I was shocked and obviously pleased as punch.