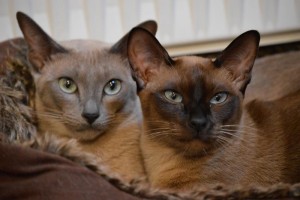 Chocolatedot Nemesis aka Nemo, is a Brown Mink Tonk and is our second breeding queen, coming from completely different lines to Io. Nemo is a 2nd Generation Tonkinese, from a new line of Tonkinese out of a Litama Siamese Queen. Nemo’s Sire is a well established male stud, Angisan Xanadoo Shadow, which has proven to produce excellent kittens of good type. As she is 2nd Gen she is registered with the GCCF as CSREF and cannot be shown, although can be shown with TICA. She expresses a strong forward personality, which is anything but shy. Extremely affectionate, she has claimed John as her’s, we call her ‘his little limpet’ as she’s always stuck to his side. Nemo projects a real calmness and is often found curled up on someones lap where she’ll stay for hours on end, or laid over your shoulder as if a baby all cuddled in. We look forward to broadening our breeding program with her in 2015.

Kitten’s planned from Nemo later this year will be 3rd generation (CS REF with GCCF) and eligible to show with TICA only. Nemo will be visiting Julie Singleton’s Tonkyway Chertan who is a Brown Colorpointed Tabby, in the hope of little tabby paw pouncing round the cottage! Updates will be posted when Nemo lets us know that she’s ready for a boyfriend!

21/8/2013: We received our genetic test results back from Langdon’s today and can report that Nemo carries both Dilute and Chocolate, and is negative for Progressive Retinal Atrophy (PRA). Carrying chocolate and the dilute gene will allow Nemo, in conjunction with the right male Tonk to product all 4 of the main coat colours; Brown, Blue, Chocolate & Lilac.