Below are photo’s of our previous litters who are now very much settled in their new homes, being attended to and pampered by their slaves. The slaves have been kind enough to provide a few words regarding their furry masters and the experience they had when being chosen as slaves 🙂

August 2014 The arrival of our little Phoenix 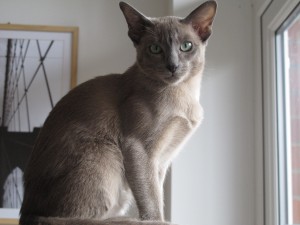 We had never heard of the “Tonkinese” cat breed, we actually discovered them while searching for a Burmese. We wanted a cat that was clever, active and playful but also very people focused. After lots of research online and many cute youtube videos we were sold on a pedigree Tonkinese as they had the characteristics that would fit with our lives and we both loved how beautiful they all looked. We contacted a few breeders all with differing responses, we learned a lot through Natalie’s website and saw how healthy the kittens looked and how interactive they were. We exchanged several emails in the beginning and wanted to have a closer look at the litter. We liked how this was first litter and how the kittens were very much part of the home.

We both absolutely adored little phoenix; she was very cute, extremely friendly and she loved Lee’s lap instantly and fell asleep on him whilst we watched the antics of the rest of the litter and the mother. To this day she still loves his lap!

It was good to see them all together and how sociable Tonkinese are and how passionate Natalie and John are about the breed.

I loved the fact we were kept up to date with her progress through the website and also how she was doing generally through regular emails. It was good to know how her personality was developing.

We also had so many questions in preparation for her life with us, from feeding, vaccinations to how she would cope with being with another kitten. We were given a host of information and goodies when we collected Phoenix which was very useful for the long car journey home. We also received a dvd with lots of photos taken from birth to the week we collected her. And since then added several thousand photos and videos.

It didn’t take her too long to settle in – we prepared a nice warm room for her, she curled up on the bed right next to my head for her first night. The next day after she looked all settled in her room we let her explore the rest of the apartment while being supervised as she was just getting used to her new friend Theia (a Tonkinese from another breeder), it took a couple of days but then they were running around the apartment like crazy kittens. They haven’t stopped since! Phoenix is a wonderful little madam and such a cute diva, wanting constant fuss and attention. She enjoys being carried about over a shoulder so she can see everything that is going on. Her favourite things are climbing to the highest cat shelves in morning to watch all the birds and squirrels playing on the balcony and also hunting spiders. She goes mad for her ‘da bird’ toy and loves to jump really high and often drags a toy to you when she wants to play. She always wants to be near the action in the apartment and she follows us around everywhere! At the end of the day she loves to have a little fuss before she settles to sleep. She’s a very cute fluffball! 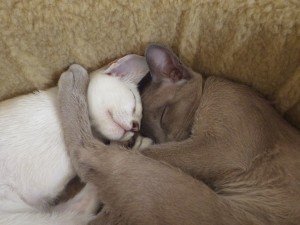 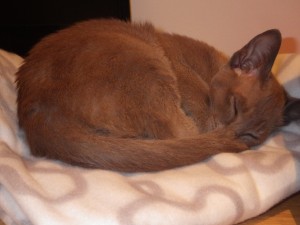 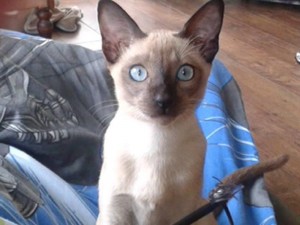 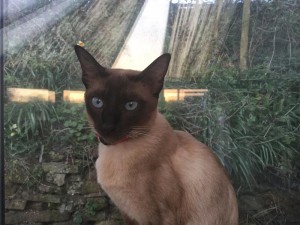 Testimonial of a Tonkinese slave.

After our Abyssinian cat died we were heart broken he was 17 and a much loved member of the family, our dog especially was pinning after his old friend, so after a while we decided to look for another cat. We were looking for a outgoing friendly cat who could also would get on with our family dog.

We looked at many different cat breeds and came across the Tonkinese.

I have always loved Siamese and Burmese cats and the Tonkinese was the perfect mix of the two, Intelligent, playful and family orientated.

ited Titantonks we were absolutely bowled over. They were such happy contented family pets. IO’s litter were the most adorable kittens I’ve ever seen, they reminded me of my old style Siamese I had when I was a girl.

Natalie and John are so passionate and knowledgeable about the Tonkinese breed, and so engaging with it. It made the whole experience so much fun, especially for my son who will always remember the day we found our forever cat and as soon as we set eyes on Pandora now called ( Lola), we knew she was the right kitten for us. Memories like that are priceless it was great to give him the same experience I had had all those years ago when I got to pick my very own cat.

Lola is now 14 months old and has grown into a confident outgoing cat. 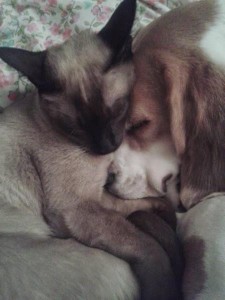 She loves our dog who in turn is totally smitten with her, and they are often found snuggled up on the sofa together. she even tolerated being cleaned or should I say slobbered over by our dog, I think she thinks Lola (Pandora) is her very own puppy. But we all know Lola is the queen of the house, who gets all our attention. She’s so entertaining and adorable. She has many hobbies, chasing her many toys, especially her feather stick and playing with the water tap. I love the way she gets stuck into what ever you are doing, like getting in the carrier bag when you are trying to put the shopping away, putting her nose on the spot where you are about to drill a hole during DIY, in fact she loves to investigate whatever activity you are doing. The funniest was when we brought our Christmas tree from the loft and she jumped onto the box that the tree was in and hitched a lift downstairs ready and eager for the unwrapping of Christmas decorations.

We loved meeting all of the Titantonks family, it was such a positive experience. I would urge anyone who is interested in owning a Tonkinese (or should I say being owned by), to visit Natalie and John at Titantonks, you won’t regret it.

Thought that it was about time that I got in touch to let you know how Zeus is doing!

We are calling him Indy after Indiana Jones! He also gets called Ind or Windy!

Needless to say he is now completely part of our family and loved and spoilt to death.

He is the friendliest and most affectionate of cats. It is Daniel’s birthday today and we had a house full on Saturday with Nerf guns being fired and remote control cars being whizzed around with a cat in the middle of it all!!

He is going to be a big boy. I took him to the vet last week to be checked over before he has his “special op” booked in for this Wednesday and he weighed in at 4.5kg with some growing still to do!

He is in to everything and gives us lots of laughs – I’d forgotten how mad they can be as kittens! He seems to have a thing about feet and shoes when he goes into attack mode and he still has a thing for shoulders and launches himself at me at times. He loves a cuddle and puts his paws up to be picked up.

I can’t imagine life without him now and I think that he is very happy with us too!

I’ll sort some photos out for you at some point – he’s gradually getting darker and has a very cute dark patch on his belly!

Hope you are all well!

I just had to write and let you know how pleased we are with our puss cat! She’s extremely affectionate, fun and not least the most beautiful cat we’ve ever had.

She has adjusted to our household very well, and is happily the centre of attention. We’ve never had an oriental/foreign cat before, and I have to say, that she’s a lot more fun loving than our beloved British Blues.

I think the Tonkinese breed are a wonderful breed for people who want a real companion and not just a cupboard love cat.

I’ve attached a couple of her latest photos.

Thank you again for everything. 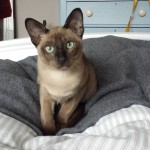 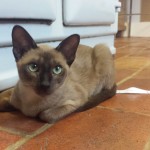