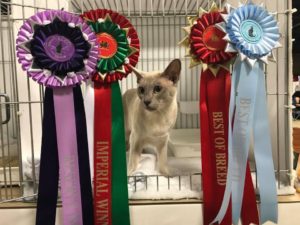 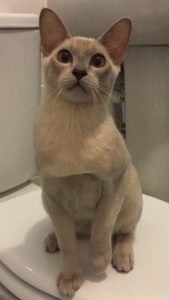 Sire: VDMozarthoehe No Doubt (Blu) (TOS a 21 31)
Neaera, meaning New Moon, is our first retained queen from Chocolatedot Nemesis’ line. Titantonks Nemesis’ Neaera will ultimately replace Nemo and therefore has large shoes to fill. She is a laid back kitten, standing out from her litter mates as one who takes it all in her stride. I would however, never call her reserved as she’s usually in the middle of an trouble, rather than on the outskirts. Like her mother she is a solid built girl, with a super high gloss coat in a ‘dove grey’ lilac, being a BCR (solid) coat pattern. Being 3rd generation I had not hoped to show her however on the 15th June ’16 the Tonkinese registration policy was amended by the GCCF to allow 2nd and 3rd gen’s to be shown. Thus in turn allowing us to show Neaera, which we hope to do so in September of this year.

Neaera at her entered at her second show won her class and obtained Best of Breed. She also was placed well in her side classes.

Titantonks Nemesis’ Neaera ventured out to her first show in the kitten class. As it was a joint show, she was entered in to both totalling 10 classes. She was initially a little nervous but settled taking the day in her stride. Her naturally stoic nature must have shone through as she gained 5 first places in one show having a red card day, then went on to win a further 4 1st places and a second in the other! I was later informed that she was a contender for BIS Foreign Kitten but was piped to the post by an Egyptian Mau. Very happy mummy indeed.