Why choose a Tonkinese? what makes this breed unique and how it came to exist. 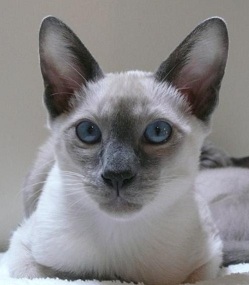 This brief history is taken directly from the GCCF webpage:

It is easy to understand why the Tonkinese breed is an increasingly popular choice of pedigree cat for pet lovers. They possess a feline beauty that showcases so much of what we love about cats – the elegant athleticism, enchanting poise and seductive eyes that make them seem a living work of art. But their captivating looks are almost overshadowed by their people loving personalities. Not only a cat for the connoisseur, the Tonk character is invariably able to charm even a die-hard ‘dog person’!

The Tonkinese look is a perfection of moderation – there should be nothing ‘extreme’ about their appearance. The head forms a ‘wedge’ shape: the top is gently rounded, with good width between medium sized ears that are slightly taller than they are wide. In profile, there is a slight nose break, the muzzle being neither short and blunt nor long and straight. There is a definite whisker pinch. The expressive eyes are almond-like, though the upper line of the eye slants down towards the nose, and the lower line is more rounded. The body is well-balanced, of ‘foreign’ type, and muscular – they are usually heavier than they look. The overall impression is of a well proportioned cat of stylish beauty.

Origins and Myths
The Tonkinese, like it’s cousins the Burmese and Siamese, has it’s origins in South East Asia, where cats were believed to carry the souls of people on their journey to the paradise of afterlife. The ancestries of the Tonkinese, Siamese and Burmese breeds as we know them today are inextricably linked. Their distinctive coat patterns result from the same gene series, (cbcs), in which a form of albinism turns black hair to brown, and leads to a reduction of pigment on the warmer parts of the body, leaving the ‘points’ darker. The Tonkinese cat’s coat pattern may be the high-contrast pointed, as in the Siamese, low-contrast solid (referred to as ‘sepia’ in the USA), as in the Burmese, or the intermediate-contrast ‘Tonkinese coat pattern’, also known as mink. Mink Tonkinese are currently eligible to be shown under GCCF rules at Championship level, with Burmese Colour Restriction (Soild) and Colourpoint Pattern (pointed) since 26th June 2013 being shown at Provisional Status, but all three coat patterns are inherent to the breed. True to Tonk type and temperament, the solid and pointed cats should not really be considered ‘variants’, though at present are still registered as such. Over 100 years ago, the three coat patterns were the most discernible feature that distinguished the breeds from one another. But since those early days, types have diverged and are now clearly unique to each.

Colourful Cats
In the UK, the spectrum of Tonkinese colours is broad. For every colour, there are three ‘expressions’ (i.e. coat patterns), as mentioned above. Depth of colour at the points remains consistent for each colour name, while body colour toning varies in depth and level of contrast with the points, according to coat pattern. Eye colour also corresponds to coat pattern: the mink Tonk has the alluring ‘aquamarine’ eye colour (ideally any shade of bluish green or greenish blue); the pointed Tonk has blue eyes (ranging from deep to light); the solid Tonk has chartreuse (green-gold) or glowing yellow eyes.

The ‘original’ brown (like the ‘seal’ points of the original Siamese and ‘sable’ brown of the Burmese) is a rich, dark tone. The chocolate is a lighter shade of warm brown. Blue Tonks are blueish-grey, with slate-grey nose leather. Lilac Tonks are a warm toned pinkish dove-grey. Caramel may be blue or lilac based, so varies in depth, but is a bluish fawn that can have a metallic sheen as the cat matures. These five colours also come in tortoiseshell varieties, which form part of the red series: the red is a rich orange colour with pink nose leather, cream is cool-toned ‘clotted cream’ colour, and apricot is a hot-toned colour that can have a fawnish undertone and, (like the caramel), a metallic sheen in mature cats. All of these colours, including the torties, can be tabby. When the three coat patterns are factored in, seventy eight possible combinations emerge!

Living with Tonks
Most Tonk lovers would agree that there is never a dull moment when you share your life with one or more of these fabulous felines. They are utterly people-oriented, and just love to be near you, be it for a stroke or cuddle, a game of some sort, or simply to watch what you are up to – possibly offering some ‘help’ with your chores! Each Tonk has their own personal favourite games of course, but a typical repertoire might include fetch, shoulder rides, catching drips from the tap, thunder-stairs, opening doors, balancing nonchalantly in high or peculiar places, and of course the more ‘traditional’ pounce-on-the-toy. While Tonks are generally quite active cats, like eternal kittens in many of their antics, they are also very good at chilling out, with their human friends and also in ‘Tonk piles’ if they live with other Tonkinese. They tend to get on very well with other cats, (ideally another relatively active and inquisitive breed or type would be the best companion). Though of course as with any animal it is important that introductions are carried out with care, Tonks can also readily form friendships with dogs, other pets and young children, being such sociable and generally easy-going felines. It would be hard to come by a Tonk that didn’t purr as soon as it was touched, more often they purr as soon as you give them an affectionate glance! Their intelligence and interactive behaviour make them delightful house pets for the owner who wants an extremely beautiful cat full of ‘purrsonality’.

Other than a good daily dose of affection, a stimulating, cat-friendly home environment, and ideally at least one other feline companion, there are no special requirements for Tonkinese cats. Their short, glossy coats require very little grooming, and providing they are fed a good quality diet, are usually kept in prime condition by the easy and pleasurable tasks of stroking the cat! Though slow to mature, they can reach reproductive maturity at quite an early age, (occasionally as young as four months old), so neutering should be performed as promptly as veterinary guidance allows, preventing any hormonally related issues, (including behavioural problems such as spraying), or unplanned pregnancies. Many people choose to keep their Tonkinese as indoor-only pets to ensure their safety, and they can be kept very happily in this way provided they are given ample opportunity to express their natural feline behaviours – for example, cat trees or towers give an appropriate place to climb and strop their claws.